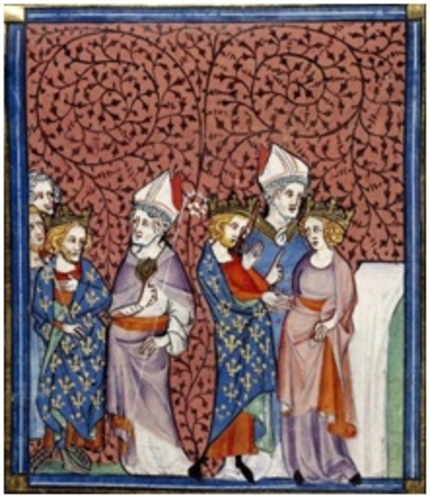 An image of Anna Yaroslavna (the scene of the marriage with Henry I) is present in the manuscript a copy of “The Great Chronicles of France” kept in the British Library: “Les Grandes chroniques de France”, ca. 1332-1350, British Library, MS 16 G VI, fol.

She was born after 1025 and was the youngest of three daughters of Yaroslav the Wise and Ingegerd (Irina) of Sweden, daughter of the King of Sweden, Olof Skötkonung (995-1022) [22, p. 7]. Anna’s exact birthplace is unknown. Probably, she came into the world in Novgorod, the permanent residence of her father until the mid-1030s. [5, p. 238-239]. In 1043, Yaroslav sent an embassy to Goslar to the king of Germany Henry III to propose him Anna as a wife and to form an alliance against Byzantium, but Henry refused both offers. [III, p. 37].

In 1048-1049, the widowed Henry I, King of France from the House of Capet, dispatched an embassy to Kiev and asked Anna’s hand to strengthen his position as well as his family ties with the Hungarian and Norwegian kings, which would help him to resist the emperor in Lorraine and Burgundy, as well as Duke of Normandy [11, p. 172-184]. The choice of the king seems also to be influenced by the opinion of Pope Leo IX, who recommended the king to marry with the consent of the bishops [XIII, p. 145]. The embassy to Rus was headed by Gauthier, Bishop of Meaux, and Roger, Bishop of Châlons, two clergymen from Henry I’s inner circle. The embassy arrived in Kiev no later than winter 1050/1051 and escorted the bride to Reims, the traditional site of the coronation of the kings of France [II, p. 100-104; VI, p. 361; XIV, p. 197; XXII, p. 69-70; XXV, p. XIX-XXI]. Anna was richly endowed by her father with “numerous gifts”: specifically, a large jacinth is mentioned, the gemstone, which was allegedly placed by Anna’s grandson, Louis VI, in the treasury of the royal abbey of Saint-Denis [IV, p. 140; 50, p. 33-58].

On the May 19, 1051, Henry I organized three ceremonies in Reims: wedding, coronation and anointing to the kingdom. Anna Yaroslavna was bestowed with the political status of Queen Consort and the right to participate in the affairs of the royal council [XVII, p. 481-482; XXV, p. XXIII; XXVI]. Anna’s is mentioned in a witness-list in a royal diploma dating back to 1051/55 [27, p. 98-99]. The hypothesis that the so-called Reims Gospel, used during the coronation of the kings of France, was brought with her by Anna Yaroslavna can be neither proved nor definitely rejected [4; 5, p. 315-316]. The activity of the queen for the benefit of the church was admired at the papal court, which tried to establish by her intercession relationships with Henry I. Therefore, in 1059, Pope Nicholas II, by the hand of Cardinal Peter Damiani, addressed to Anna, “the illustrious queen of Gaul,” a message full of praise and pastoral instructions [XXIII, p. 447].

In 1059 or 1060, along with her husband as well as the secular and ecclesiastical nobility of northern France, Anna attended the solemn ceremony of foundation of Saint-Martin monastery in Paris [XXIV, p. 14-18; XXVII]. Anna’s witness’s signatures appeared regularly in Henry I’s letters and diplomas up to his death in August 1060 [19]. By tradition, only a male member of the royal family was eligible to become an official regent in Philip I’s childhood, these functions were therefore committed to the king’s son-in-law, count Baudouin V of Flanders [XI, p. 123; 14, p. 88-90]. Nonetheless, sources report that Anna was de facto a co-regent and took independent decisions in count’s absence from court [VIII, p. 271]. Anna’s name is mentioned in twenty charters granted by her son in 1060-1075 “on advice of our beloved mother Anna” or “with assistance and on request of Anna, the venerable queen and our mother” [19]. The Soissons charter of 1063 contains Anna’s Cyrillic autograph: АNА РЪНNA [XXV, p. 47-49; 40, p. 141-143; 47, p. 196].

Apparently, in 1067 Anna Yaroslavna left the court and moved to the domain of her second husband, Raoul (Ralph), the Count of Crépy-en-Valois, with whom she entered a relationship in the early 1060s. [XVIII, p. 499; XIX, p. 28]. The count was one of the most influential lords in the kingdom, and he was constantly named on the subscription lists of charters of young Philip I [19]. Obviously, Pope Alexander II and the French Church did not recognize Anna Yaroslavna’s second marriage, and, according to the Chronicle of Saint-Pierre-le-Vif of Sens (pseudo-Clarius), Raoul was even excommunicated [XIV, p. 197]. It is unknown, however, whether the account of the pseudo-Clarius is reliable, because Alexander II’s bulls and letters provide no evidence supporting the excommunication, except on letter addressed to the archbishops of Reims and Sens, in which Pope asked them to intervene and “resolve everything peacefully” [VII, col. 1320]. It highly likely that from the point of view of the Church Anna remained the queen of France, and although in one of his letters of 1069 Raoul calls her “my wife Anna” [IX, p. 9-10], the expression “Countess de Valois” was an invention of 19th century historiography [25]. As an anointed queen, she could not renounce her title [7, p. 130-139]. Seemingly, the second marriage was for Anna a way to secure the House of Capet and ensure the future for her children: Count Raoul was an ally of Duke William of Normandy, the conqueror of England (1066) and main opponent of the House of France [21, p. 231-232].

In 1074 Anna Yaroslavna was widowed once again and returned to the court. In 1075, “in the palace in Paris,” Anna is mentioned in the witness-list of Phillip I’s charter where Anna is named “the king’s mother” [XXV, p. 188-191]. The queen died around 1075-1079, probably in Ile-de-France (possibly in Senlis), where she possessed a demesne [XXV, p. 329-331]. Her burial place remains unknown; apparently, she was not interred in the royal burial place in Saint-Denis because of her second marriage, and she was committed to earth in Saint-Vincent, abbey, which was henceforward many times devastated and rebuilt.

An attempt of a Jesuit scholar Ménestrier to identify, in 1682, a tomb in the abbey of Villiers-aux-Nonnains with Anna’s burial place was questioned by his contemporaries; nowadays, his conjecture has been rejected as a forgery [XXI, p. 42-48]. The account of the authors of the History of France that Anna “returned to her native land” cannot be verified and is thus unreliable [XV, p. 161].

Verneuil in Ile-de-France (Vernellum / Verneuil-sur-Seine) [XXV, p. 105-107; 39, p. 201-202]; possessions in the cities of Senlis and Lana and their environs [XXV, p. 329-331; 39, p. 203-207]. An excerpt from the letter of Anna Yaroslavna on the founding of the monastery of Saint-Vincent in Senlis reports: “[I give] the land that Canon Yvon owned next to the church, and that I bought from him along with the bakery and all those goods that the land has the habit of producing; [I give as well] a new hospitium, with all the furnishings that I have previously owned in this place, at the price of three livres in the coin of the aforementioned city [Senlis], in the vicinity of which a church was erected; [I also give] a mill owned by the city in a village called Gouveux (Guvils), near Senlis in the diocese of Beauvais; a village which is called here Blancmesnil, and an allodial land in the village called Crespis, next to Lan”.

her husband’s sister Adela of France (Adela the Holy), the Duchess of Normandy and Countess of Flanders, wife of Baudouin V, Count of Flanders [XXV, p. 13-15];

The jacinth (ruby) was apparently included in Anna Yaroslavna’s dowry: “The most precious jacinth of his grandmother, the daughter of the Russian Tsar [in the original: regis Ruthenorum — King of the Ruthens], which the King Louis VI gave from his hands to ours [that is, to Saint-Denis Abbey], he intended to place in the crown of thorns of our Lord”(1137) [translated by T. I. Stukalova: IV, p. 140]; the jacinth was placed in the “Sacred Crown” in the 12th century, which later has become the crown of Louis IX the Saint. This crown was subsequently used during the coronation of the kings of France [50, p. 33-58]. The inventory of the treasury of Saint-Denis Abbey of 1666 states: “The crown of the mentioned Louis the Saint made of solid gold, adorned with very large pearls, between which there is one ruby, worth one hundred thousand crowns, in which Louis the Saint, set the thorn from the crown of our Lord”[15, p. 185]. Lost along with the crown during the French Revolution.

Reims Gospel (Évangéliaire de Reims or Texte du Sacre) (?): A Church Slavonic manuscript kept in the library of the city of Reims (Carnegie library: Bibliothèque Carnegie (Reims), Ms. 255), the first 16 leaves of which are written in Cyrillic and belong to the first half of the 11th century. The disputes whether the manuscript was part of Anna’s dowry still continue to nowadays [35, p. 133-142].